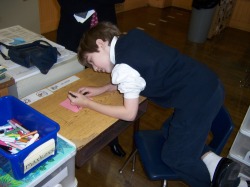 Children with autism are often very sensitive to artificial ingredients, tend to have problems with common food allergens, and often don't absorb nutrients properly.  In addition, many have feeding issues, with strict food aversions or preferences, which further impairs nutritional status.  Although good nutrition is important for all children, it is vital to include a nutritional component to any child's autism treatment plan.  Children with autism, no matter how verbal, are often unable to communicate the types of distress they are experiencing in a way that is recognizable as GI or immune function distress; part of the failure of communication inherent in all forms and levels of autism includes an impairment of this sort.  Biomedical testing, visiting a DAN doctor or other health practioner knowledgeable in treating the medical components of autism, and consulting with a natural health or holistic nutrition consultant can be extremely beneficial and rewarding components of a treatment protocol for an individual with any type of autism spectrum disorder.


Consultation services to families who have a child on the autism spectrum are available at no charge.